Throwback to a simpler time when I had live shows...Right now everything is cancelled, which really sucks (thanks Yukon Government, I'm sure you'll all be fine in your big houses, collecting your salaries, working from home). Sitting here on a Friday night and my body is itching to play. Normally I'd be on a stage right now, doing exactly what is in this picture. I miss my career...Sending big hugs to everyone else out of work (again). Keep your faith and keep hustlin'

They Can't Cancel My Attitude ;)
~Roxx~ 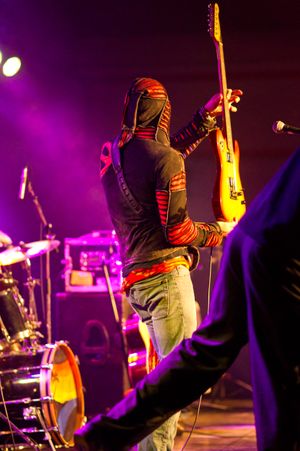 Fall is falling, the days are getting shorter, they're expecting record lows...The wind is blowin' cold, and winter has moved in...Another long, dark spell is upon the Yukon. Still, despite the Covid craziness, shows are still happening in some ways. Monday has a new music event called the Manic Monday Jam! Not so much a jam, where random people get up and play, but selected musicians who all know the songs ahead of time get up and jam. Last week, I played guitar and was fun to flex my muscle on 60's and 70's rock and even some Dead. This week, I'll be on bass. Rounding out the band is the amazing Delmar Washington on drums, who went to PIT back in the day. JP Erickson on Guitar who went to MI back in the day, Hal Jordan on Guitar and Vocals, and special guest Kim Rogers on Vocals. 6-8pm and no cover. Will try my best to get some footage and pics!
Snow Worries,
~Roxx~ 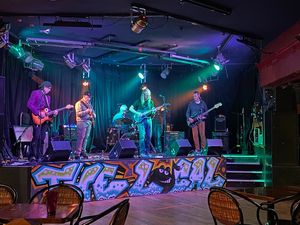 My friend Justin Murr passed away recently. I never met him in person but we were friends. We first came in contact as fans of a singer named Jamie Rowe, who sang for the rock band Guardian. Jamie had a website with a message board, and that's is how I met Justin. Fast forward to Facebook times and we stayed in touch. Justin had a music project called Liberty n' Justice, where he would write or co-write songs and get many guests artists to play on the songs; these were usually rock musicians from famous bands in the 80s. So one day I get a message from Justin, asking if I'd like to be on his new double CD, on a track with Jamie Rowe! So his double CD, called the Cigar Chronicles, was one CD of original music and one of covers. The track I did with Jamie Rowe was an Mmm Bop cover. I just played the solo...What was cool is CJ Snare, the singer from Firehouse, produced/mixed the track, and one of the singers I've listened to a LOT. Also, being on a CD with Jani Lane, Mark Slaughter, Tim Gaines from Stryper, and many others. Also, Bumblefoot, who I later on got to hang with and who used my guitar for a show here.
Anyway, Thanks to Justin for giving me the chance to play with one of my heroes and be on a CD with so many other heroes.

Here's a pretty instrumental piece on my nylon, classical guitar that I wrote recently. This one is called "I Have..." and is played in a unique open tuning that uses only 2 notes. The tuning from low to high is: B, F#, B, F#, B, B.

I came up with this tuning after watching and talking to the great David Lindley. He was playing a Bouzuki and I tuned the two high strings to the same note to try and get a more ethnic sound. Turns out this tuning has been used by Matchbox 20 and the Tragically Hip. I've written a few songs in this tuning.

My friend Nicole passed away. Who is Nicole? One of the kindest, strongest people I have met. And how did we meet? A long time ago she was playing in a band with one of my first guitar heroes, a guy named Stu Davies (who had a red Joe Satriani guitar and could play Surfing With The Alien note for note). Their band and the band I was in shared rehearsal space. I got to know Nicole and she was very supportive. She hosted a youth jam and even though I was only a few years out of high school, I was helping her host.
A little while later she asked me to play bass in her band. I went from playing the opening jam of a festival (before it actually started and only doing 3 songs) to being in one of the headlining acts in front of lots of people. No one knew me before that, but soon everyone knew me. Not sure why she took a chance with me, but am grateful she did. That was like going to music school, and Ivan the guitar player taught me so much about music, being kind and playing bass. Safe to say there'd be no Roxx Hunter without Nicole Edwards. We had some amazing shows, laughs, jams, and would always correspond to figure out what we were gonna wear on stage. I really thought she was going to the next level, but then she started getting sick and could no longer play. She still sang, but scaled down, and we did quite a few special shows, just the two of us.
One rainy, summer's day, filled with mosquitoes and black flies, we waiting in her beautiful backyard in the Yukon for the sun to shine. It came out just long enough for us to film this song. A beautiful prayer that we all need right now. Take a moment and listen to it! You are finally free Nicole, your voice and soul. I love you and big hugs to Lee (love you)...
~Roxx~

My friend Maegan Garrett from Magean Garret Art (Facebook) and BeyondBlondeArt (Instagram) made these cool rocker prints. They are a 3 piece set and feature a bass player, guitar player, and drummer. They're big, bold, colorful and awesome! She had 10 sets ordered and decided to donate the proceeds to me, to help with costs of being off work from cancer surgery and healing. This has been my second major surgery in under 5 months. The sets are $200 each and there are 5 sets left. Message me if you would like a pair. They would look amazing in a studio, jam spot, teaching room, garage, living room, or bedroom. They can be shipped as well.
Support Real Art,
Roxx

Not much to say, had an amazingly busy run of shows the last few weeks, criss-crossing the north! Most were sold out and the busiest I've ever seen these venues in my life. So that was good, some real magic. Survived my brush with a weed volcano en route to a very old village along a river called Champagne. There was swinging, moving, grooving, and lots of people happy to be dancing in the streets again. Also, had an amazing time recording for my friend Rick's album. His soon-to-be hit song called Crackhouse Burndown, the Yukon's unofficial anthem. It's sounding pretty damn tight...The big news is last week I went in and was put under for a few hours, for another surgery on my neck. Still dealing with cancer BS, but this should hopefully keep it far away for quite a while. My voice seems stronger than last time but overall it's kicking my ass...so laying low and rewatching classic movies like Ferris Bueller's Day Off, Star Wars, Bond Movies, and etc, and sleeping a lot. Apologies for the lack of updates, feelin' like shit. Have lots of gigs in the horizon but that's to be determined on what my body says. Will be out rocking soon enough...
Keep It In The Pocket (like Charlie Watts),
Roxx 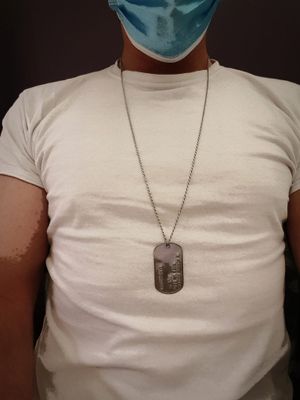 Thanks to Claire Ness and the Yukon Transportation Museum, The Village Bakery and Deli, and the J&S wedding, for the past 4 unforgettable shows. What fun. And I conquered a weed volcano...(I'll save that for the book). 5 shows coming up, in Dawson, Whitehorse, and Atlin. The 2 shows in Dawson are iffy due to forest fire activity. Playing a Casino and house party. Friday and Saturday it's Ride For Dad, a cancer fundraiser, which reminds me, FUCK Cancer! Saturday is the return of the Bobcats in Atlin...Stay safe and stay tuned for more music...
Light Up The Sky,
~Roxx~ 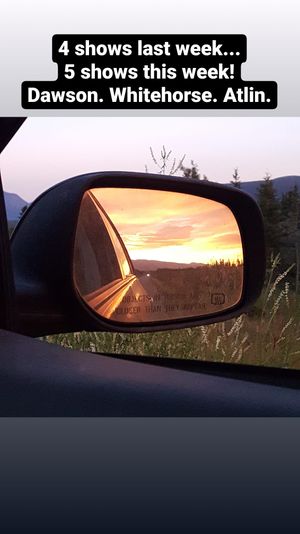 Just wrapped up 3 shows in 2 days (2 of which were SOLD OUT and the other was a wedding). Drove over 600km and was a lot of setting up gear and taking it down. Tired, but content. 5 shows coming up this week, barring Covid interruptions. Also, got stung for the first time in my life and it's now my mission for the complete and entire extermination of all wasps, everywhere around the world...
Stung Out,
Roxx 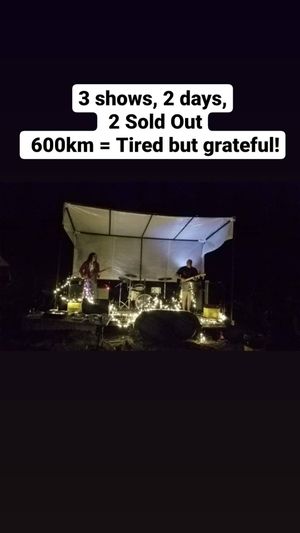 Been a minute...Wrapped up filming of my solo, 1 hour set for a music festival, complete with production team, 3 cameras, and me with 3 guitars (Classical, Acoustic, and Electric). Hoping that makes the light of day. Always good to shake up a folk festival with some heavy unplugged rock that deals with the darker side of life. I started off with some of the more Global music, inspired by my world travels, then brought it heavy and ended with a long bluesy rock crescendo. Fingers crossed it makes the grade.
This past week I was set to hit the road and put some more miles on my guitar and wheels, and play 2 solo shows, but that was cancelled nearly last minute as there was a Covid outbreak. So that was a gut punch to the wallet and spirits. Normally the show always goes on, but these are special times. 4 shows this week, and hoping they roll on, roll on...
Also be sure and check out the music on here and on YouTube. If you dig it, help out, by sharing it...Speaking of sharing, thanks for sharing your time with me and be good to each other...I'll share this amazing Chickenfoot concert with you...Enjoy!
~Roxx~